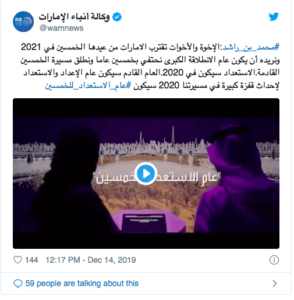 Taking to Twitter, the UAE Vice-President said the country will be observing the 50th year of the Union in 2021. He said the UAE will start preparing for the next 50 years in 2020 itself.

Sheikh Mohamed bin Zayed said 2020 would be the “turning point” in the country’s history. “In the next fifty years, we will prepare all sectors of the country for the post-oil phase. We will build a true knowledge economy based on innovation and creativity.

This is the sixth time in a row that the UAE has identified a theme for the upcoming year. The announcements see federal, local and private entities aligning their activities to achieve the objectives of the theme. The year 2019 was celebrated as the Year of Tolerance, which witnessed year-round legislations and policies through which the country instilled values of coexistence and peace in society.