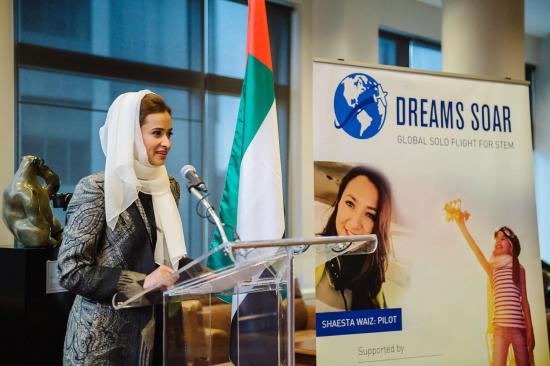 Capt. Aysha Al Hameli the first woman to represent the UAE in ICAO

Members of the International Civil Aviation Organization, ICAO, will meet on today to elect its new president from among three candidates, including Capt. Aysha Al Hameli, the first woman to represent the UAE in the Organisation’s Council and the youngest of the three candidates.

If elected, Al Hameli will also become the first woman ever to head the ICAO Council. She is contesting the elections for the coveted post with an impressive record of accomplishments.

Aysha Alhameli is a pioneer. She started in civil aviation early, and aged 16 became the first female pilot in the UAE. She has an impressive academic, technical and managerial career culminating in 2009, when she was appointed as the first UAE Representative to the ICAO Council, and the youngest Permanent Representative in the history of the Organization.

Aysha Alhameli has been the UAE’s Representative to the Council of ICAO for almost a decade. She is now one of the most experienced and respected members of Council: amongst her achievements she has been First Vice- President; Chair of the Implementation and Strategy Planning Group; Chair of the Human Resources Committee; and, Chair of the politically sensitive Global Market Based Measures environment group.

She has also worked to review the ICAO service code, appointments of senior staff in ICAO, succession planning, and advocated for geographical and gender representation in ICAO. She was one of the founders and contributors to the ICAO flagship “No Country Left Behind” initiative.

Aysha Alhameli has also worked extensively to form a bridge between ICAO and the greater civil aviation community: she has been a strong advocate for the ICAO Next Generation of Aviation Professionals program and supported the round-the-world “Dreams Soar” flight to promote aviation and STEM among school children.

Before being appointed to ICAO, Aysha Alhameli was the Director of Air Transport of the UAE General Civil Aviation Authority where she led more than 80 international air services negotiations that enabled UAE airlines to provide service around the world.