China government has been at pains to emphasise that it has the tools to control the spread of this coronavirus outbreak, but this morning did concede it needs help – in the form of protective medical equipment.

The disease appears to spreading more efficiently than its cousins Sars or Mers. That’s probably down to the fact that the world is much more dense and interconnected than in 2003, when Sars emerged, and because this coronavirus is more easily transmitted. “It’s more like the flu, which can whip around the world in no time,” says Mackay. 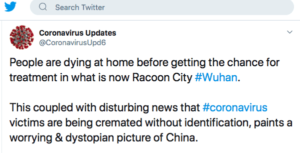 It appears that China will not be able to contain its spread within the country, but that doesn’t necessarily mean the death toll will spike, he says. “One big hole in our understanding is whether the disease is more dangerous than Sars,” he says. “That part is hard to answer because we’re missing a big important number, which is how many people are confirmed cases but haven’t gone to the hospital and are being quarantined at home, and how many have recovered.”

“So I’m wondering why we’re not seeing kids among the cases,” Mackay says. He speculates it might be because we’re focusing on the most severely infected people, who are presenting to hospital, and missing the fact that many people, including children, might have the coronavirus but are only pr Viruses are “relentless replicating adaptive machines” that are constantly evolving, and this coronavirus will be no exception, Mackay says. Virologists need to see a larger selection of genome sequences of the virus than are currently available “to see more of what’s happening with the virus as it’s passing through thousands, possibly tens of thousands of hosts”.

Here are the major developments in the ongoing coronavirus now: