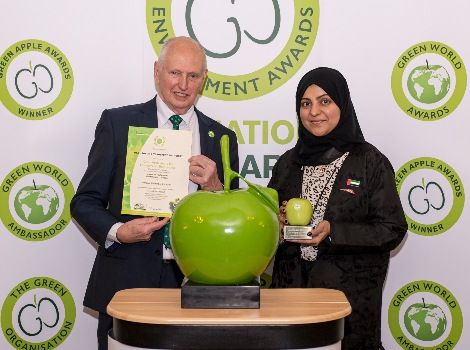 Dubai’s Roads and Transport Authority (RTA) has won the Green Apple Award for Environmental Best Practice in the Middle East. The award was presented at a ceremony held recently by The Green Organisation in London, UK.

Nada Jasim, Director of Safety, Risk, Regulation and Planning, at RTA’s Strategy and Corporate Governance Sector who received the award in the UK, said,

“The award is testament to RTA’s efforts in carrying out power-saving initiatives, including replacing conventional lighting systems by LED power-saving systems and endorsing the use of solar power at operational sites. Initiatives also include undertaking sustainable transport projects (Metro and tram), and delivering smart services to clients to minimise the use of paper and carbon emissions.”

“The success of these initiatives is driven by RTA’s commitment to forging partnerships with public and private sectors, which cement RTA’s leading role in sustainability practices. It also reflects RTA’s corporate agility and the ability to quickly adapt to changes in the internal and external environment,” she added.