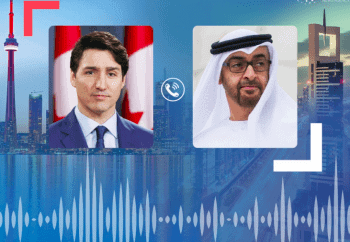 Many issues discussed over the telephone call, His Highness Sheikh Mohamed bin Zayed and Trudeau discussed ways to strengthen the strong friendship between the UAE and Canada to serve the interests of the two friendly countries.

The two leaders exchanged views on the latest regional and global developments of mutual interest, particularly the current events in the Middle East, and means to maintain the security, stability and work to contain tension and avoid escalation.

They emphasised the importance of pursuing diplomatic approach and dialogue to address regional issues.

Sheikh Mohamed offered his condolences to Trudeau on the Canadian victims of the Ukrainian plane crash.

Trudeau thanked Sheikh Mohamed for his sincere and noble feelings.

Sheikh Mohammed helps cyclist after falling in Dubai during the race

UAE sends medical aid to Brazil to tackle the…