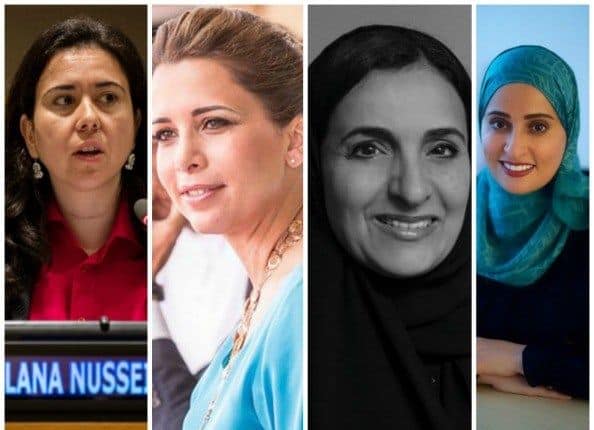 Meet UAE Women Top 100 most influential women in the world

The UAE government has made significant progress on the women empowerment front and they have been giving equal constitutional rights to men and women. A glance at the list of popular UAE women who have been conquering heights in diverse fields proves the fact. Here, we have listed some of the most influential UAE women, who have been successful in creating their own niche in UAE as well as across the globe.

Fatima Obaid Al Jaber:  Holds the distinction of being the first Emirati woman to be elected to the board of directors at the Abu Dhabi Chamber of Commerce in 2009. She currently serves as the chief operating officer of the United Arab Emirates-based Al Jaber Group.

Sarah Al Amiri:  The UAE’s Minister of State for Advanced Sciences, Sarah Al Amiri is also the deputy project manager of the Emirates’ mission to the red planet in 2021.

Mariam Al-Mansouri:  The first female fighter pilot in UAE. Mariam, who has led UAE mission airstrikes against ISIS over Syria, is a true inspiration for women across the globe.

Reem Al-Hashimi: Is the Director general of the Expo, who also happens to be the UAE Minister of State for International Cooperation.

Nayla Al-Khaja: Is the first female film director/producer in the UAE. She made history at Cannes by being the first Emirati filmmaker, whose project got accepted by the festival’s Producers’ Network.

Huda Kattan: Is the person behind the billion-dollar beauty empire, Huda Beauty. A makeup artist, beauty blogger, and entrepreneur, Kattan is one among the “ten most powerful influencers in the world of beauty”

Amal Al Qubaisi:  The President of the Federal National Council, is the first female leader of a national assembly in the United Arab Emirates and the Arab world. Prior to her current role, Amal Al Qubaisi served as the chairwoman of the Abu Dhabi Education Council.

Amina Al Rustamani: Is the former group CEO of TECOM Group, who started her career as an electrical engineer at the company. An influential and charismatic business leader, Al Rustamani was ranked number 9 in the CEO Middle East’s fifth annual list of the world’s most powerful Arab women.

Noura Al Kaabi: Is the minister of Culture and knowledge development for the UAE. She served as the minister of state for Federal National Council Affairs before she was assigned the current responsibility. She has also been the chairperson of twofour54 and Abu Dhabi Media Company.
Al Kaabi made it to the list of ‘Top 100 Global Thinkers’ by Foreign Policy Magazine, the first Emirati to have achieved the distinction.

Nahla Al Rostamani: Is not your conventional type of woman who used to play with dolls when she was small. She was rather attracted towards racing cars and was successful in breaking through the glass ceilings and fulfilling her passion of becoming a racing driver. Al Rostamani is the first female Emirati F3 driver.

More than 62 School Across UAE closed to Celebrate Diwali

Brazil-UAE Business Forum and investment opportunities in both countries