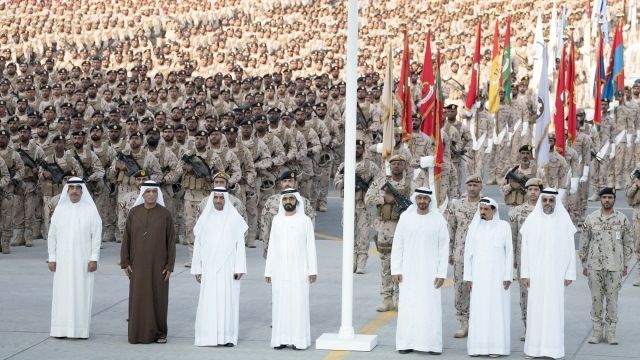 Mohammed bin Rashid and Mohamed bin Zayed: The sons of the Emirates lit the flame of hope for our brothers in Yemen

His Highness said that our valiant soldiers, who participated in the mission of “restoring hope” in fraternal Yemen, offered the highest verses of redemption alongside their brothers in the Arab coalition forces. They assured the world that the UAE’s contribution will always. 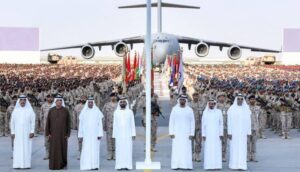 remain one of the main pillars to ensure the security and stability of the region, and that the bias of our country to the right and its owners is firmly rooted in the mountains.

His Highness directed “a salute of pride and appreciation to the strong and heroic heroes of the armed forces who struck the finest examples of giving and giving in the fields of dignity, for the sacrifices they made in order to establish the foundations of justice, and their efforts in the field of humanitarian work and reconstruction, and a similar greeting to the lives of our righteous martyrs, who They streamed with their fine blood, the greatest heroism that will continue to bear witness to the affiliation of our armed forces to the dear soil of our dear homeland, its commitment to defend its capabilities, and not to hesitate to support every rightful owner and stand beside every oppressed, so that the name of the Emirates remains associated with good, growth and hope forever. » 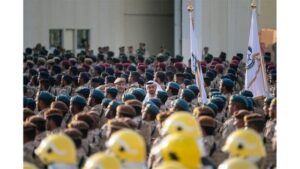 For his part, His Highness Sheikh Mohammed bin Zayed Al Nahyan said: “We are proud and proud of the loyal sons of the Emirates who have proven their heroism, courage and determination in carrying out the national and humanitarian tasks in fraternal Yemen.” He added that the people of the homeland, as we have pledged to them, expressed the authentic mineral of the Emirati human being and the entrenched values ​​that the first founders cultivated in this people and this land to stand alongside truth, justice and support for the oppressed, and extend a helping hand to all in need of assistance. His Highness stated that the UAE will continue to cultivate goodness and open the doors of hope, and provide humanitarian and development aid and assistance in all parts of Yemen.

His Highness said: «On this occasion, we remember with respect and appreciation our honourable martyrs who sacrificed their lives in the field of truth and duty, to make the glory of their country and raise its flag. “Their memory will remain in our minds.”

His Highness Sheikh Mohammed bin Zayed Al Nahyan said, “The people of the Emirates have been the best supporter of their valiant armed forces in their noble mission in brotherly Yemen, and presented a wonderful image of patriotism, solidarity, solidarity and awareness, and this is not strange for this indigenous people, who always turn around their leadership and armed forces. ».

His Highness stressed that “our armed forces have always been and will be a force of peace and stability in the region and the world, and that the UAE is a country that makes peace, sows good and sows hope wherever it goes.”

He added: Despite the accomplishment of all our forces for the tasks of liberation, insurance and empowerment, our armed forces are still committed to supporting the Arab coalition in air operations, logistical support, training and combating terrorism … We hope that God will gather the hearts of the Yemeni brothers to fight their enemies and complete the liberation of the remaining ten percent of Yemeni lands controlled by the Houthis. “Our valiant armed forces will remain the guardian of our state … and our alignment with the right is firmly rooted in the mountains.”

“Our soldiers assured the world that the UAE’s contribution will remain one of the main pillars to ensure the stability of the region.” “The people of the Emirates have proven their heroism and determination in carrying out the national and humanitarian missions in fraternal Yemen.”

“The Emirates will continue to cultivate benevolence and open the gates of hope, and provide aid and assistance throughout Yemen.” “The Emirates is a country that makes peace, sows good and sows hope wherever it goes.”

His Highness Sheikh Mohammed bin Zayed Al Nahyan, Crown Prince of Abu Dhabi and Deputy Supreme Commander of the Armed Forces, witnessed a celebration organized by the armed forces in the Zayed Military City in Abu Dhabi, to celebrate the valiant sons of the country participating in the Arab coalition forces in Yemen, and on this occasion.

She highlighted the role of the UAE in medically assisting the brotherly Yemeni people … a multi-dimensional and multi-stage role that was not only limited to providing urgent medical assistance, but also aimed at working to prevent and reduce the spread of diseases and epidemics in Yemen, as the UAE was a pioneer in working with the World Health Organization in The year 2016-2017 to reduce the spread of cholera, a matter that was praised by many international and international humanitarian organisations, who expressed appreciation for the UAE’s medical and humanitarian initiatives i

Mothers of the martyrs:

And she addressed the mothers of the martyrs by saying, “Your children were role models from whom we learn the meanings of belonging and sacrifice so that the flag of the homeland remains a thunder in the fields of pride, honor, right and duty … They who gave the precious and the soul a victory for the oppressed and in defence of the truth and in response to the call of the nation … God have mercy on our innocent martyrs. The immortal, and reward their families and families with the best reward, preserve our wise leadership, and always make our beloved emirates a symbol of generosity, generosity, and humanity.

The ceremony included a video presentation of a march entitled “Messengers of Hope”, which contained scenes of the UAE’s military, humanitarian and development efforts in Yemen, after which the national peace was played accompanied by an air show .. Then His Highness Sheikh Mohammed bin Rashid Al Maktoum and His Highness Sheikh Mohammed bin Zayed Al Nahyan, Your Highnesses, members of the Supreme Council of the Federation, Rulers of the Emirates and His Highness the Crown Prince of Sharjah, to review the queue, which is lined up with different types of weapons, mechanisms, equipment, fighter planes, transport, helicopters, marine boats and defensive military systems, which are examples of the types of Emirati weapons that participated in From the Arab coalition on the right.

by the armed forces in Zayed Military City in Abu Dhabi, to celebrate the brave sons of the nation participating in the Arab coalition forces in Yemen, and on this occasion, His Highness said in a tweet published Through his account on the social networking site “Twitter”: “My brother Mohammed bin Rashid and the rulers witnessed the celebration of the UAE people participating in the Arab coalition forces in Yemen … a greeting of pride for the loyal hawks who performed the Secretariat for the homeland and the stability of the region, their sacrifices and their national and humanitarian role lit the flame of hope for our brothers In Yemen … the UAE will remain a brother and a bridge to peace.”

The UAE will invest Dh1.83 billion in African economies

A UAE consortium for Africa worth 500 million dollars