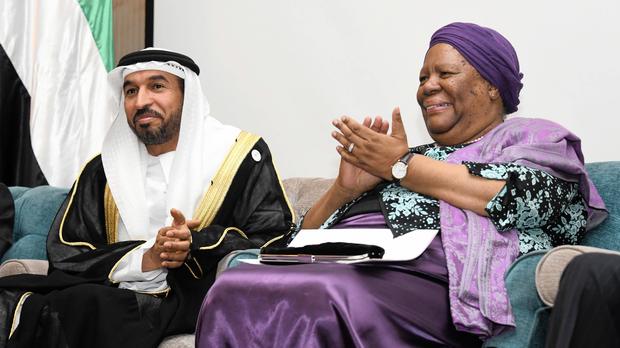 South Africa and the UAE celebrate 25 years of diplomatic relations

The UAE enjoys a strong and growing relationship with the African continent, supported by the vision of the UAE’s Founding Father, the late Sheikh Zayed bin Sultan Al Nahyan, and continued by the country’s wise leadership of President of the United Arab Emirates, Sheikh Khalifa bin Zayed Al Nahyan and his brother, Vice President of the United Arab Emirates, Sheikh Mohammed bin Rashid Al Maktoum.

This vision seeks to strengthen ties between the Middle East and Africa in order to achieve peace and stability. The strategic relationship with African countries also aims to actively support sustainable development efforts on the continent, and it is within this context that we continuously explore avenues for enhanced cooperation.

International Relations Minister Naledi Pandor has hailed the growing strong diplomatic, trade and economic relations between South Africa and the United Arab Emirates (UAE) as a historical partnership built on a firm foundation laid by the close ties of friendship and trust enjoyed by the founding fathers of the two nations – the late former president Nelson Mandela and Sheikh Zayed Bin Sultan Al Nahyan, respectively.

The prestigious celebration marking the 25th anniversary of South Africa and UAE diplomatic relations drew hundreds of senior government officials from both nations, ambassadors and high commissioners representing different countries across the world, academics and journalists to the packed Sheraton Hotel in Pretoria on Tuesday night.

“I am truly honoured and grateful to share this evening with Your Excellency [Ambassador Mahash Saeed Alhameli], and the distinguished guests as we celebrate 25 years of the fruitful relations between South Africa and the United Arab Emirates,” Pandor said while addressing the gathering.

“I wish to take this opportunity to express best wishes to you and the entire leadership of the United Arab Emirates, on behalf of President Ramaphosa, the Government and the people of South Africa on this auspicious occasion that serves as a crucial reminder of how far we have come as partners and how much we have achieved over the years.”

Pandor said the two founding fathers and iconic statesmen – Mandela and Sheikh Zayed Bin Sultan Al Nahyan, both born in 1918, not only shared a special bond of friendship, but also had remarkable characteristics evidenced through their spiritualism, vision, determination and hard work, as well as generosity at home and abroad, “which in turn ensured that they devoted their lives to the service of their peoples and the creation of a better world for all”.