His Highness Sheikh Mohammed Bin Rashid Al Maktoum, Vice President, Prime Minister and Ruler of Dubai, and His Highness Sheikh Mohamed Bin Zayed Al Nahyan, Crown Prince of Abu Dhabi and Deputy Supreme Commander of the UAE Armed Forces, announced the new logo that will represent the UAE to the world, as part of its nation brand. 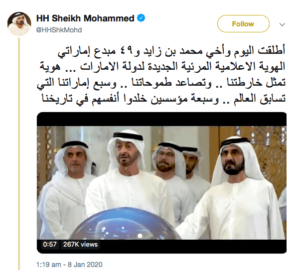 “Today, me and brother Mohammed Bin Zayed and 49 Emirati innovators launched the new visual media identity for the UAE … an identity that represents our map .. and our increasing ambitions .. seven emirates that are racing the world .. seven founders who immortalized themselves in our history.”

Ten million according to Sheikh Mohammed voted for choosing the new logo, and accordingly 10 million trees will be planted in exchange for their votes.

Sheikh Mohammed bin Rashid Al Maktoum said, “The UAE Nation Brand represents our map, our identity and our rising aspirations. It also represents seven emirates, seven founders and seven horses with which we will compete in the global race for development.”

“Opening the vote globally to choose the design of the UAE Nation Brand highlights the human dimension of the UAE’s values of partnership and openness,”

Sheikh Mohamed bin Zayed said, “The UAE Nation Brand tells the story of our union, our unity, our future and of a country that is firmly making its mark across the world. Our goal for the new brand is to enhance the Emirates’ global reputation, in which we invested thousands of teams throughout 48 years of constant work.”

The UAE Nation Brand aims to share the Emirates’ inspiring story of constant development in the face of challenges, highlight the Emirates’ unique identity and strengthen its long-standing positive image in the global consciousness. It strives to cement the country’s position on the world map as an effective and influential nation of regional and global prominence and share milestones of the UAE’s exceptional journey of development that transformed the country into an incubator of innovation and an entrepreneurial hub.