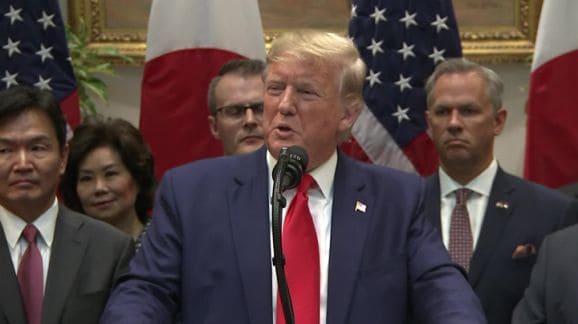 The US president threatens the Turks: if the operations are “beyond the limits” the White House is ready to “annihilate” the country’s economy.

President Trump, in a series of tweets, told Turkey not to “take advantage” of the decision to withdraw part of the American troops in northern Syria. ” As I have stated strongly before, and just to reiterate, if Turkey does anything that I, in my great and unmatched wisdom, consider to be off limits, “I will totally destroy and obliterate the Economy of Turkey, I’ve done before!”

At the same time the US leader defended the decision to reduce the number of soldiers in the region, while risking opening the way for Turkey to attack Kurdish fighters, fundamental in the past in the fight against the Islamic State.

The United States has about a thousand troops throughout Syria. Yesterday the Kurdish YPG militia (the People’s Protection Units) called Trump’s choice to withdraw “a stab in the back”. In Iraq and Syria, the Kurds have worked and fought side by side with the US soldiers against Daesh. According to analysts and experts on Middle Eastern issues, it could also favor a reorganisation of the Islamic State which could take advantage of the confusion to reposition itself and conquer new territories.

Turkish President Recep Tayip Erdogan has stated that his goal is to combat the Kurdish militias in the border area and to set up a “safe zone” in which to place up to two of the more than 3.6 million Syrian refugees today in Turkey. According to some sources, yesterday the Ankara artillery started bombing targets of Kurdish militias in al-Malikiyah, in the north-eastern Syrian province of Hassaké, near the Turkish border. Turkey will not bow to threats over its Syria plans, the Turkish vice president said Tuesday in an apparent response to President Donald Trump’s warning to Ankara the previous day about the scope of its planned military incursion into northeastern Syria.

Companies in the UAE were ranked for happiest firms in 2019